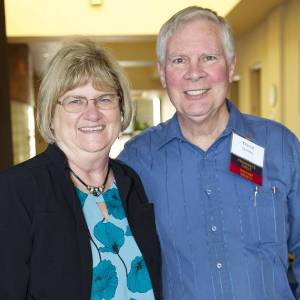 Dave and Linda Quinby know that education changes lives. Their philanthropy at MiraCosta puts that knowledge into action and resulted from a confluence of interests and events.

They spent most of their careers at Edwards Air Force Base, the world's premier flight research center. Dave worked in employee and labor relations for the Air Force; Linda worked at NASA, first as a technical writer/editor and later as a manager for contract technical services. "One thing our careers taught us: Communication is key, whether in STEM fields, labor relations, or any other field."

Outside of work, Linda has been an active member of the American Association of University Women (AAUW) for many years. When they moved to Carlsbad in 2008, she became active with the Del Mar-Leucadia Branch. There she learned of the branch scholarships at both MiraCosta and CSUSM, particularly in nursing.

When Dave's mother, Jean Quinby, died in 2014, she left a small inheritance for her children. Since she had been a nurse for over 50 years, including serving as Director of Vocational Nursing at El Paso Community College, and since she was living near CSUSM at the time it was built, Dave and Linda used their part of the inheritance to endow a nursing scholarship at CSUSM in her honor.

Not long thereafter, Linda heard MiraCosta Superintendent/President Dr. Sunny Cooke speak at an AAUW meeting. She was so impressed with Dr. Cooke and MiraCosta's outreach to underserved communities that she came home and suggested she and Dave endow a scholarship of their own at MiraCosta to support students preparing for careers in science, technology, engineering, and math (STEM) - including biotech manufacturing and nursing. Two years later, Dr. Cooke introduced the MiraCosta Promise, a new program designed to remove significant financial hurdles for two years of college for all first-time, full-time students. Dave and Linda elected to make the MiraCosta Foundation the beneficiary of their retirement accounts with the funds going toward the MiraCosta Promise. In the meantime, they make annual donations targeted to current needs.

"With no children of our own, this is our way of contributing toward and investing in the future. We feel good knowing we've helped make it possible for some students to graduate who, without financial help, might never achieve their potential - and the world might never benefit from what they have to offer.

"We can't help everyone, but for the ones we've helped, we've made a difference. And that will be our legacy."