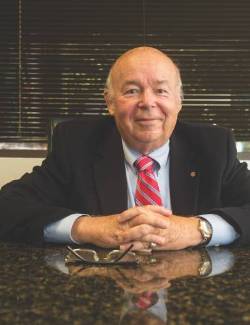 Retired lawyer and former President of the Carlsbad Chamber of Commerce Stephen "Hap" L'Heureux has been committed to serving the region since he and his late wife, Ann, arrived in Carlsbad in 1972. Early in his career, Stephen served in the U.S. Navy Judge Advocate General Corps practicing administrative and criminal law in New York City. This work led him to establish his own law practice in San Diego, where he counseled clients on everything from estate planning and family trusts, to real estate, and corporate and partnership law.

In addition to his leadership at the Chamber of Commerce, Hap was a member of the Carlsbad Planning Commission for more than 25 years, serving multiple terms as chair. He was also a founding member of Imagine Carlsbad, a citizens group focused on Carlsbad’s future, which led him to help draft the Carlsbad Community Vision with the Envision Carlsbad Citizens Committee. His deep background in leadership also led him and a group of his peers to form Leadership 2000, a training program that is now housed at Cal State, San Marcos and has supported thousands of local executives and community advocates since its creation.

Short for “the happy one” (the English translation of his last name), his nickname “Hap” could not be more appropriate to describe his character and commitment to the community. Always one to help others, Hap has volunteered for numerous organizations and at one point served on eleven separate boards and commissions at the same time, while still practicing law. In addition to the MiraCosta College Foundation, his board service has included six years as President of New Village Arts Theater in Carlsbad, Vice-Chair of the Tri-City Hospital Foundation, Founding Member of The Carlsbad Charitable Foundation, and Board Member of both the Carlsbad Rotary Club and the Carlsbad Rotary Foundation.

During his decade-long service for the MiraCosta College Foundation, Hap served as Board President for three years, during which he helped grow the endowment so that the organization can better connect the students, their causes, and needs with the broader community. His family has also established multiple scholarships to ensure future MiraCosta students have as much opportunity as possible to succeed in the classroom and in their careers.

For his tireless volunteerism and leadership, he has been awarded numerous honors and accolades, including being named Citizen of the Year by the City of Carlsbad, the Lifetime Achievement Award from the Carlsbad Chamber of Commerce, and recognized three times as a Volunteer of the Year by the North County Philanthropy Council.