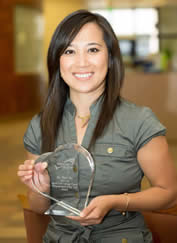 It’s not everyday a sociology teacher can talk about street gangs from first-hand experience. When sociology professor Thao Ha talks about the social consequences of gangs, she can point to the scar on her arm. She was shot in a gang-related drive-by shooting as she was coming out of a billiards hall near where she lived in Houston.

“I was in the wrong place at the wrong time,” Professor Ha said. She was 23 and was not involved with gangs, but found it easy to get sucked into trouble.

“It was a challenging time growing up. Both my parents were working and we lived in a tough neighborhood. There were not the best influences there,” Professor Ha said.  At the time of the shooting, Ha was about to drop out of college. “I just didn’t see the point.”

But after the shooting, she looked at things differently. “I felt so lucky to be alive. I knew my parents wanted me to go to college and I saw the pain in their eyes, so I knew I needed to go back to school and do something right.”

Professor Ha knew that she wanted to study sociology after she met a social worker.  “She told me about her work and I saw that she was making a difference in people’s lives.”

Professor Ha brings the lessons she learned into her classroom. “I want students to know that society is so much bigger than we are,” she said. “We look at our challenges and failures, but as we study sociology, we redirect our focus to how society impacts us and how our actions influence the outcome of society.”

Professor Ha has won awards for her teaching, including the Leadership Education of Asian Pacific Americans Award and the MiraCosta College Associated Student Government Women of Achievement Award. Dr. Ha also finished her doctorate in sociology in 2012.

As an immigrant from Vietnam whose parents had not attended college, Professor Ha draws on her experiences to mentor first generation college students in MiraCosta’s PUENTE Program. “I faced not knowing what I was doing in college, so now I want to help students overcome obstacles and stay on track.”